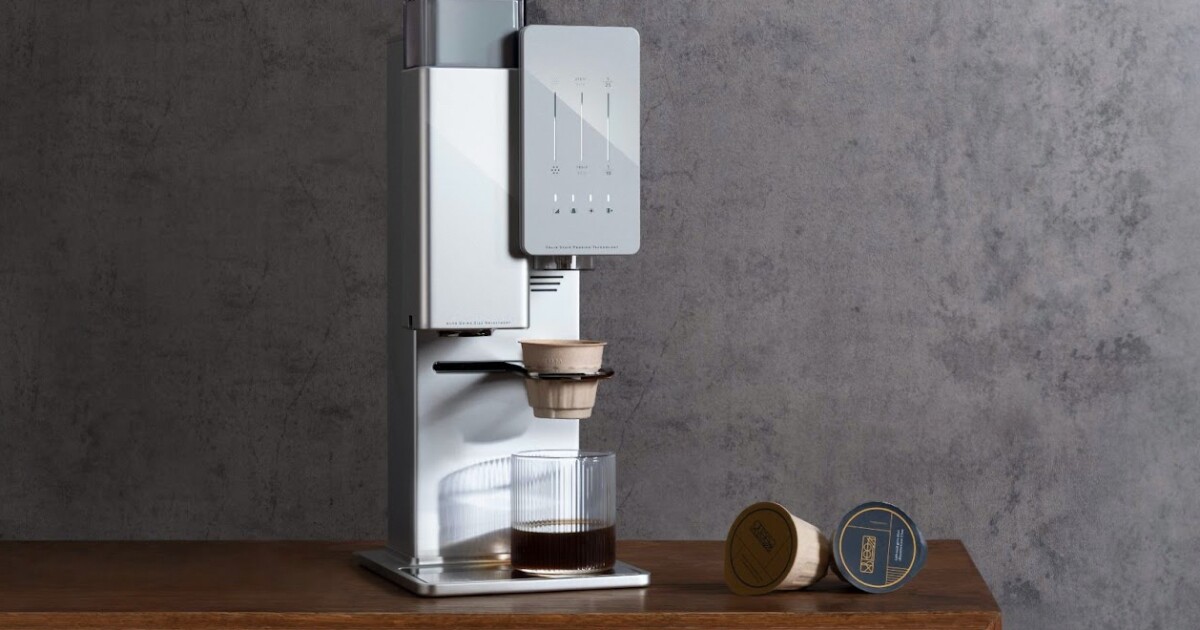 Most baristas will tell you that if you want a really good cup of coffee, you have to start with freshly ground beans. That’s where the xBloom home machine comes in, brewing individual portions of coffee from whole roasted beans that it grinds for each use.

xBloom is currently a Kickstarter campaign and works with system-specific biodegradable pods that are pre-loaded with different species and roasted beans.

After pouring the required amount of water into the xBloom reservoir, the user begins by holding the capsule over the scanner at the top of the machine so that it can “read” the RFID tag on the bottom of the capsule. This allows the device to identify the type of bean in the pod and select a pre-programmed grind/brewing recipe for that bean. However, if the user wishes, he can use the companion application to override this recipe, replacing it with his own.

The user then opens the sealed pod and pours the beans into the xBloom mincer, before placing the empty pod into the machine’s motorized docking station (essentially a pod tray). Titanium nitride-coated 48mm tapered burrs grind the beans to the desired grind size, while the dock moves the pod to fit under the grinder.

After the beans are completely ground, they are placed in a pod, which, in turn, is moved back to fit under the water dispenser. Hot water is then poured into the pod, the temperature and mode of pouring is determined by the recipe – the doc periodically shakes the pod from side to side to level the ground beans.

After passing through the pod, the water (now in the form of coffee) collects in a cup that sits under the pod. A scale in the dock detects when the right amount of water has been dispensed and stops adding at that point.

Depending on the recipe, the xBloom produces between 150 and 374 ml (5-12.7 oz) of coffee per use. The entire process, from scanning a pod to a filled cup of coffee, reportedly takes about four minutes.

Assuming xBloom reaches production, a $399 deposit you’ll get one with a pack of 32 pods – this pack has a planned retail price of $799, and additional capsules will cost 99 cents each. Currently, the pods are offered in 11 varieties, though xBloom plans to work with independent developers to create more.

However, if you really like the idea of ​​using your own beans, you might want to check it out PADMKR. Currently on Indiegogo , it grinds user-provided beans and dispenses them into a single-serve, reusable stainless steel bag that’s compatible with existing Keurig and Nespresso machines. If all goes according to plan, it can be purchased with a deposit of $129 – the planned retail price is $159.

xBloom is demonstrated in the following video.

The new ownership team must preserve the historic past of The...