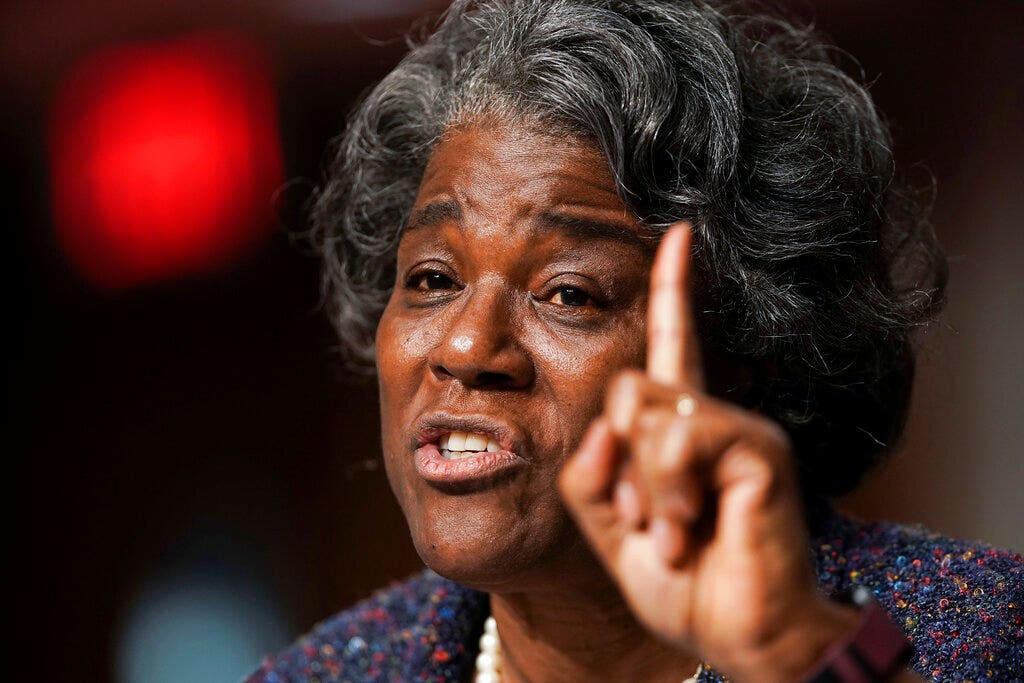 Russian troops in the south of Ukraine They reportedly advanced to the country’s second-largest nuclear power plant on Friday, a day after an attack on the largest such facility.

The council met on Friday for an emergency session at UN headquarters in New York in response to Thursday’s attack.

The threat to the plant in South Ukraine was an “imminent danger,” Thomas Greenfield said.

“Russian forces are now 20 miles away from Ukraine’s second largest nuclear facility,” the ambassador said. “So this inevitable danger continues.”

Linda Thomas Greenfield, now the U.S. Ambassador to the United Nations, testified during the approval hearing before the Senate Foreign Relations Committee on Capitol Hill on Wednesday, January 27, 2021.
(Associated Press)

“Nuclear facilities cannot be part of this conflict,” Thomas Greenfield said earlier in her speech. “Reliable electricity is vital to a nuclear facility, as are backup diesel generators and fuel. Safe transit corridors need to be maintained. Russia must stop any further use of force that could jeopardize all 15 operating reactors in Ukraine – or interfere with Ukraine’s ability to maintain the security of its 37 nuclear facilities and the surrounding population. “

Full remarks by Thomas Greenfield at the UN can be found here.

On Thursday, the world watched in horror as the attack on the Zaporozhye plant in Enerhadadar, which caused a fire at the facility, threatening a radiation catastrophe outside the immediate location of the station.

But later the director general of the International Atomic Energy Agency, Rafael Mariano Grossi, said the fire had been put out and there are no immediate signs of increased radiation levels on the site.

Grossi, appearing through a video at a UN meeting, told those gathered that the Zaporozhye station had no damage to the reactors and that after the fire the station was operating normally, according to the Associated Press.

The director did not say who was responsible for the “shell” hitting a building on the site of the plant, which caused the fire, but said Russia had told him a few days before the strike that its forces would try to take control of the plant, the AP reported. .

Meanwhile, Russian officials have accused of setting fire to a “Ukrainian sabotage group” that tried to provoke a Russian patrol group in the area, according to the AP.

Russia was focused on the Zaporizhzhya website – not only the largest in Ukraine, but also the largest in Europe. probably looking for “levers” about Ukraine’s civilian population, a senior US defense official told Fox News on Friday.

Linda Thomas Greenfield, now the US Ambassador to the United Nations, testified during the approval hearing before the Senate Foreign Relations Committee on Capitol Hill on Wednesday, January 27, 2021 (Associated Press)

“You can use your levers of influence to punish the population to make it harder to resist you.”

Earlier, fighting broke out in northern Ukraine near the site of the decommissioned Chernobyl nuclear power plant, where in April 1986 there was an accident, which is considered the worst in the industry.

The Russian-Ukrainian war on Saturday was approaching its 10th day.

Tyler Olson of Fox News and the Associated Press contributed to this story.

Dear Abby: The woman hid her cheating while the cheating boyfriend...