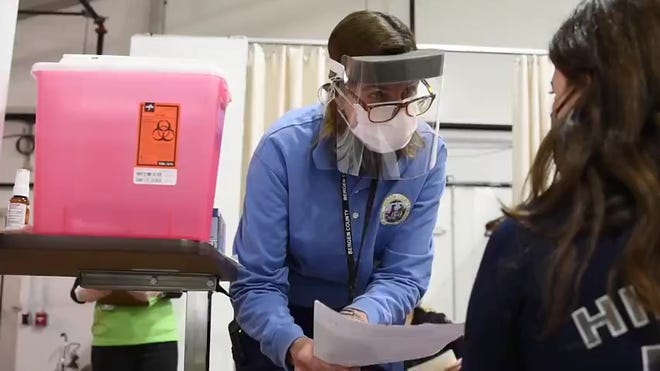 The New Jersey Supreme Court has rejected an appeal by the state’s largest police union at the last minute to block Gov. Phil Murphy’s mandate to vaccinate workers in high-risk areas, meaning more than 11,000 county and state penitentiary officers must prove evidence. . vaccination or risk of losing a job.

Chief Justice Stuart Rabner wrote a three-page order Monday saying the New Jersey Police Charity Association does not deserve a postponement of the appeal because it has not indicated that its claim is based on a regulated law or has a reasonable likelihood of success, or that the relief was in the public interest, among other things.

According to the order, four more judges agreed with him. The two disagreed, saying they would stay.

The Supreme Court ruling dampens the union’s hope that the judge will intervene to block Murphy’s mandate, which requires workers in high-risk environments, including hospitals and prisons, to receive the COVID-19 vaccine or face discipline, including possible job losses.

The governor’s office noted the decision, saying it retains a valuable mitigation tool that will protect the state’s residents at greatest risk.

“The decision of the Supreme Court of New Jersey to reject the candidates’ attempt to block order further shows that the mandate of the administration is on a solid legal basis,” said spokeswoman Alena Alfaro.

“The mask for children has been abolished, thousands of prisoners have been released, the number of infected has fallen sharply – but we are going to throw out loyal civil servants along with garbage tomorrow!” Said Coligan. “Does that sound right to anyone?”

Vaccine:Nearly 2 of New Jersey’s 3 children have not been vaccinated against COVID-19 as Murphy plans to drop masks in schools

Vaccines and vaccinations – which will also be needed – have proven to be very effective in combating the worst effects of COVID.

But many law enforcement officers are still reluctant to shoot, and penitentiaries are perhaps the most vigilant. Only 41% of the State Department of Corrections is vaccinated, the state appeals court said when it first rejected the union’s lapel.

Meanwhile, more than 61% of prisoners received the vaccine.

Murphy’s order issued last month requires staff, contractors and anyone working in the county or state penitentiary to make the first vaccination by February 16 and provide evidence of their current vaccinations by March 30.

The governor blamed the changes on a highly contagious version of the omicron COVID-19, which also ended the policy of allowing weekly testing as an alternative.

The union along with the Association of Senior Law Enforcement Officers decided to block the order on behalf of 28 locals.

But last week the state appeals court sided with the governor, ruling that Murphy did not go abroad and did not violate the civil rights of officers when he issued the rule, according to the union.

A panel of three judges unanimously concluded that Murphy’s order was “a rational and balanced response to our current circumstances,” and that the State Civil Protection and Disaster Relief Act gave the governor more than enough authority to unilaterally accept the mandate.

Steve Janoski covers law enforcement for NorthJersey.com. To get unlimited access to the most important news about those who protect your local community, subscribe or activate your digital account today.

Video: a dog dares to break out of a window during...