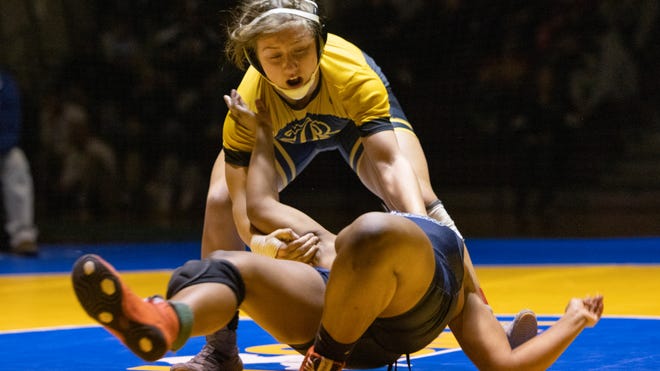 PHILIPSBURG – Lexi Matsela has just set a high bar for every wrestler who will be part of the entire wrestling program of Bordentown High School, which is moving into the future.

The senior won the first-ever state title – boy or girl – on Sunday, culminating in a major 13-3 decision in the 132-pound final at Philipsburg High School.

“I worked so hard for it, I’m as happy as it was shown on the mat,” Matsela said.

“I was told I was the best in brackets and could beat anyone. That’s how I looked at it. “

Working from the fourth seed, Matsela has avenged two previous losses last month by selecting those opponents in the last two rounds of the tournament, no bigger than in the title match against Olivia Palmer of Timber Creek.

Eight days earlier, Palmer had beaten Matzel in the semifinals of the Southern Region Tournament.

Palmer, a strong sophomore who was able to finish the match in one big move, was also chasing history. Like Matzel, Palmer tried to become the first state champion in his program – a boy or a girl.

Matzel never allowed Palmer a chance. She set the tone early, taking Palmer to her side in the first period and quickly took a 4-0 lead. More reverse points were scored in the second period and increased the score to 13-0.

Palmer, who finished her sensational season with a record of 16-2, made one last attempt at a major throw in the final seconds of the match, but was unable to overcome the beep.

Matzel had a historical title.

“I think all those losses (at the start of the season) helped me reach that point,” said Matsela, who suffered four of five defeats of the season in six fights. “It made me fight for more.”

“You can see it in the results,” Gil said. “She was able to overcome several losses, but our conversation has always been that it will help you. Let’s use the schedule to see everyone these losses in December and January so they lead to success in February.

“Coming to this tournament, we have already fought with all three girls. We worked on the sequences and parts of the matches. She is so open to learning, understands how to perceive criticism, and makes these small adjustments to get better. The week before this tournament was not about hard work, but about working smarter. “

Matsela, who finished third in the region last week, opened a 6-3 victory over Grace Kachanovsky of Bridgewater Raritan, who put Bardentown into overtime on 23 January. In the semifinals, Matsela won 6-2, beating the top. sown by Camilla Beschad of the Jackson Memorial. Last month, Bieszczady received a Mazzella 14-5 major.

Her name will forever be remembered in Bordentown as the state’s first wrestling champion.

“It couldn’t have happened to a better person,” Gil said. “Her work ethic, leadership, dedication and ability to learn and listen made her reach this point.”

One victory – The Copper & Blue

Ex-Eagle, NFL analyst breaks down what happened to the pass rush...