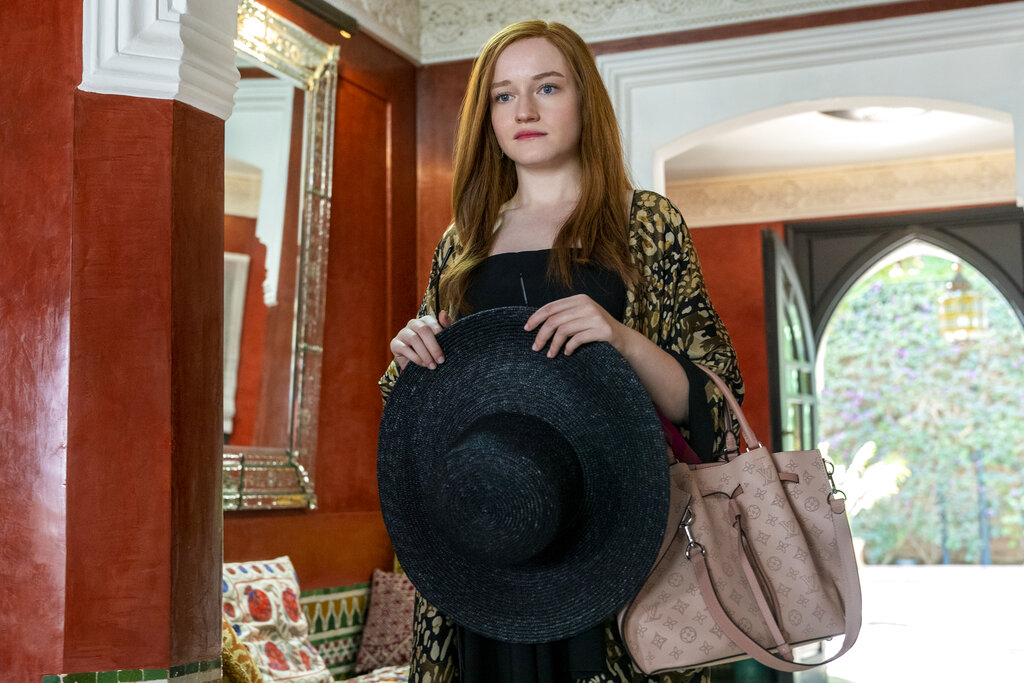 Two programs that debuted last week made me watch and tempted me to watch more series.

One is the Netflix movie “Inventing Anna,” which I originally tuned in to see Julia Garner’s “Ozark” in a different role.

It turned out that Garner was so ingrained in my mind as her infamous Ozark character, the insidious but helpful Ruth Langmore, that I continued to hear Ruth’s voice, though Garner gave Anna a European accent or some unidentified look.

Garner also interests you in Anna Pelvy, a young woman with no figurative roots who captured New York society by storm, earning and spending millions on a deal. The New York State Attorney’s Office accuses Anna of fraud, fraud and other crimes, while Anna claims to have earned every penny because she worked hard and some time successfully to get it.

Anna Khlumsky plays Vivian for a weekly magazine modeled on New York Magazine, which published an original story about Pelvy a couple of years ago.

“Inventing Anna” has more class than recent performances by Shonda Rhymes. It’s even more reminiscent of the quality of “Gray’s Anatomy,” “Scandal,” and “How to Avoid Murder” than some of the stereotyped or deliberately later series, such as Netflix’s “Bridgeton”.

Early action contrasts between Rickers Island, where Pelvy, who is denied contact, is being held, Vivian’s magazine, which initially refuses her initiative to write Pelvy’s story, Vivian’s apartment, where her obsession with Pelvy worries her husband, and secular people. could still compromise.

The setting is tense and makes you want to know more, especially about the relationship between Pelvy, a Manhattan yuan, and a handsome young fashion designer, the latter two getting a lot of screen time, but by the end of the first episode not clearly showing who they are and why they are important.

Another program I liked was “Richard”, which shows the laconic fighter Lee Child with crime in a different light than in Tom Cruise’s films.

This is because Alan Ritchson, who plays Richards for Amazon Prime, has a height of 6 feet 5 inches and a hardness as Child describes him.

The plot is familiar. Richard, although a stranger in a small town, is accused of a crime and, proving that he can not commit it, goes to reveal it.

I have a double reaction to watching the Winter Olympics, which was seen on NBC and Peacock at Sunday’s closing ceremony.

View real races, slaloms, figure skating, ice dancing, sledding, curling, etc. can be exciting, especially in winning moments such as Nathan Chen’s unusual performance to earn a gold medal for figure skating, or the soulful, restless races of skier Mikaela Shifrin and snowboarder Sean White, as they fail to place on the podium.

The problem is the time when athletes are on the slopes, on the ice, on the gutters, skating rinks or half-pipe. The way commentators fill this time only makes it even more relevant for the next skier, skater, hair curler or X-player.

My impatience and endurance do not withstand the lack of real substance. Even a ten-second break between performances is often painful. The camera doesn’t know where to find something interesting, so it lingers on a person who has just finished their race or routine, like a crowd of coaches or someone relaxing on a bench – good television.

Comment is worse. Experts who could give an insight into how an athlete excels or drowns out a step tend to chatter reluctantly while waiting for the next significant event.

Worst of all – these are interviews that, as with NFL stars who aren’t Tom Brady and not baseball managers, – take me No-Doz. Don’t forget about coffee. – Include obscene questions to athletes who answer shyly or say what you saw in the interview since the first bumper cognitively said, “Yes, I hit the ball well.”

If I had made a donation to the U.S. Olympic Committee, I would have donated my gift to a limited set of MGM coaches from the movie The Golden Age to teach athletes how to say something useful or interesting during interviews. And teach them not to look like they desperately want to run away from the microphone and the reporter holding it.

All in all, I’ll take boring patches to see the best of performance. Nathan Chen’s phenomenal play is worthy of all alarm when a reporter asks the same sad obvious question or gets the same easily anticipated answer.

I just wonder why there should be boring patches. Or boring anything.

Thanks to Tracy Davidson of Channel 10, who gave me the first chance to see Chen’s masterpiece in full by posting it on Facebook. (I watched a wonderful tour of “Hadestown” at the Academy of Music and returned home and to the TV at the end of Chen’s performance.)

In gratitude, I will leave the Olympics for a minute to thank Sue Series from Channel 29 for introducing me and the audience to “Hello, Philadelphia” to some of the local dogs that appeared yesterday in the Super Bowl alternative on Animal Planet “The Puppy Bowl ». It’s amazing how many of them have grown since the October tape and yesterday’s broadcast.

The play by David Lee White, Richard Bradford and members of the OK Trenton Ensemble tells the story of a statue made by children from the privileges of working with a sculptor at a summer camp. The statue, a hand with the palm facing forward with three fingers raised, and the thumb and forefinger bent in a circle, meaning “good”, was so controversial for unexpected reasons (meat performance) that it was installed on Tuesday and ordered to be picked up that Thursday .

Flynn, played by Kevin Bergen in essentially a documentary, plays the role of himself, a reporter who covers the construction of the statue by children using pots and pans and learns the art, welding, drilling, polishing and other skills in this deal. In the play Flynn records his play two days before removing the statue, a larger story, and must return to Trenton for an update.

The sculptor who designed the statue, Eric Schultz, also played by Bergen, comments that Flynn creates a story where there is no history, but Flynn justifies himself by saying that the removal was a mistake and he is against it.

The play also mentions Trent. Complaints allegedly caused by police officers sparked a story that led to the statue being taken from the streets of Trenton.

So far he is in the lobby of the Passage Theater House, the Mill Hill Theater on E. Front Street.

Shows worth catching are back

Despite how much is available on television today, only a few series elevate the media to something special.

I’m talking about the series you want to capture after the second premiere of the new season, such as “Ozark” from Netflix.

One such series, the premiere of “The Amazing Mrs. Meisel,” debuts in season 4 on Friday.

We should expect the next and last season of the spin-off AMC “Breaking Bad”, “Better Call Solo”, the premiere of which was announced on Monday, April 18, when a series will be released.

Like “Ozark”, the finale of the 6th season of “Better Call Solo” will be held in two stages. The first part, which starts in April, has seven shows. Second half, starting Monday. July 11 will be six.

The promising series “State of the Union” begins tonight on Sundance and AMC.

The show depicts a married couple played by trusted Brendan Gleason and Patricia Clarkson, which shows that they, alone or together, are going to discuss that day with their marriage counselor.

More than the parcel, I am interested in how the “State of the Union” is presented. It will go out for 10 minutes every night at 22:00 on AMC.

Who knows? This may replace the 10:00 news release as a program we schedule to watch at this time.

In addition to the promise directed by Stephen Friars, known for directing the films “High Fidelity”, “The Queen” and “Philamen”, among others. He also made the 2018 film The Very English Scandal.

Like “High Fidelity,” “State of the Union” has a screenplay by Nicholas Hornby.

Matt Sauer’s prospects have been upgraded by the Yankees