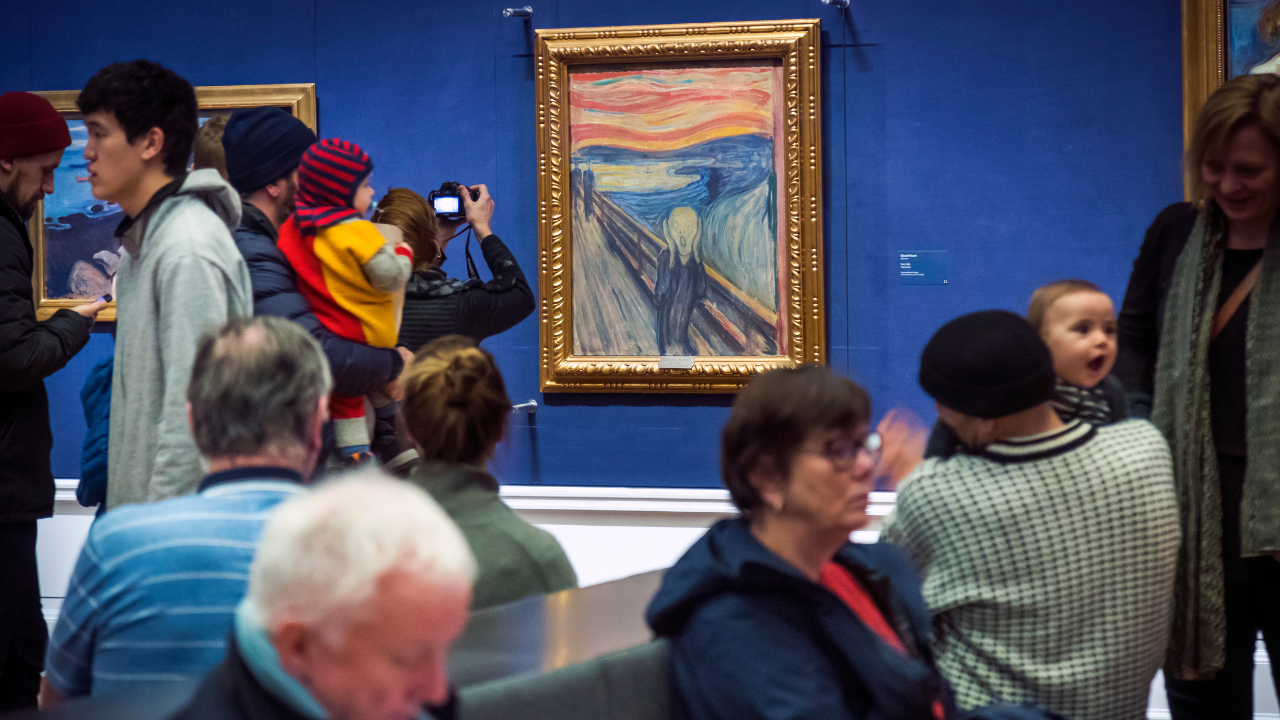 Climate activists in Norway tried to stick themselves to Edvard Munch’s 1893 painting The Scream at an Oslo museum on Friday.

Norwegian police said two people tried stick yourself to a famous picture while a third person filmed them. “Scream” was in a frame protected by glass, which did not allow damage.

Although the painting remained intact, you could see the remains of the glue on the glass.

In a video of people trying to cling to a glass frame, one man can be seen screaming: “I’m screaming for people to die.”

People look at Edvard Munch’s painting “The Scream” at the National Gallery in Oslo, Norway, Sunday, January 13, 2019. On Friday, November 11, 2022, activists from the organization “Stopp oljeletinga” (Stop Oil Exploration) tried to glue themselves to the frame pictures.
(Heiko Junge/NTB Scanpix via AP)

“I scream when lawmakers ignore the science,” another person yelled.

The individuals are part of the Norwegian group Stopp oljeletinga, which stands for Stop Oil Exploration, and said they “wanted to force lawmakers to stop oil exploration.”

This is not the first time that climate activists have tried to glue their hands to paintings.

November 5 of this year climate activists in Spain went to Madrid’s Prado Museum and tried to stick some paintings by Francisco de Goya with their hands.

Activists glued their hands to the paintings and painted “+1.5 C” on the wall of the museum.

In a statement, the museum said the paintings were not damaged and condemned the actions.

RADICAL CLIMATE ACTIVISTS TARGET PRICELESS ART, BUT EXPERTS WARN VANDALS WILL ONLY HARM THEIR CAUSE

“We condemn the use of the museum as a place for political protest of any kind,” the statement said.

On October 23, activists from the Letzte Generation (the last generation) threw mashed potatoes at a painting by Monet worth 110 million dollars, which was in the Potsdam museum.

The group said they threw mashed potatoes into the painting to draw attention to the dangers of fossil fuels.

“We make this #Monet the state and the public the audience,” the group tweeted. “If it takes a picture of #MashedPotatoes or #TomatoSoup to remind society that fossil fuels are killing us all: then we’ll give you #MashedPotatoes in a picture!”

Sally Hickson, an art historian at the University of Guelph in Canada, previously told Fox News Digital that she doubts the activism will actually change minds.

“Does it convince people? It is very difficult to convince people when people do not see what is happening on the planet. I don’t know if that’s going to convince any of those people,” Hixon said. “I mean, I just think we live in a time period where people have very ingrained ideas about things.

Julia Musta and Bradford Betz of The Associated Press and Fox News contributed to this report.

Adam Sabes is a writer for Fox News Digital. Tips for history can be sent to the address Adam.Sabes@fox.com and on Twitter @asabes10.

Who is leading the fight for the title? Power points...

The Dodgers manager has an ominous comment about Walker Buhler