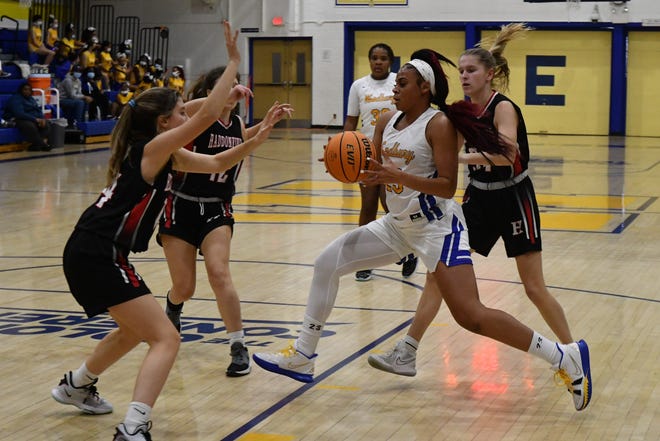 The Woodbury High School girls basketball team, one of the state’s top contenders for the Group 1 championship, has been suspended from this year’s NJSIAA tournament after seven players were suspended for leaving the bench during an altercation with fans last week, the sports principal Dan Howie said.

The incident occurred in Delran during the South Jersey Invitational basketball tournament on January 18. The Thundering Herd was up by more than 20 points with less than five minutes to play when the fans started arguing, Howey said. Spectators were escorted from the concourse, but seven Woodbury players left the sideline.

At that point, the game was called a 68-47 Thundering Herd victory.

“No fighting or anything like that,” Howie said, “but the NJSIAA has seven athletes coming off the bench.”

more:Who were the shining stars in South Jersey girls basketball from January 16-21?

The next day, the NJSIAA notified Woodbury of their suspension.

Woodbury was 11-1 after beating Delran, but had to drop contests to Cherry Hill East and Holmdel after seven players were suspended for two games because of the incident.

The Thundering Herd was expected to challenge St. Bonaventure’s Alexis Davis for the state championship.

“The kids work hard,” Howie said. “We will try to stand up for our children. We will support our children. This is a great team. It’s a real shame that viewers are fleeing your season. We are looking at all options.”

Josh Friedman has produced award-winning South Jersey sports reporting for the Courier Post, The Daily Journal and the Burlington County Times for more than a decade. If you have or know of an interesting story to tell, reach out on Twitter at @JFriedman57 or by email at jfriedman2@gannettnj.com. You can also reach him at 856-486-2431. Help support local journalism by subscribing.

How e-grocery technologies can empower underrepresented companies and communities