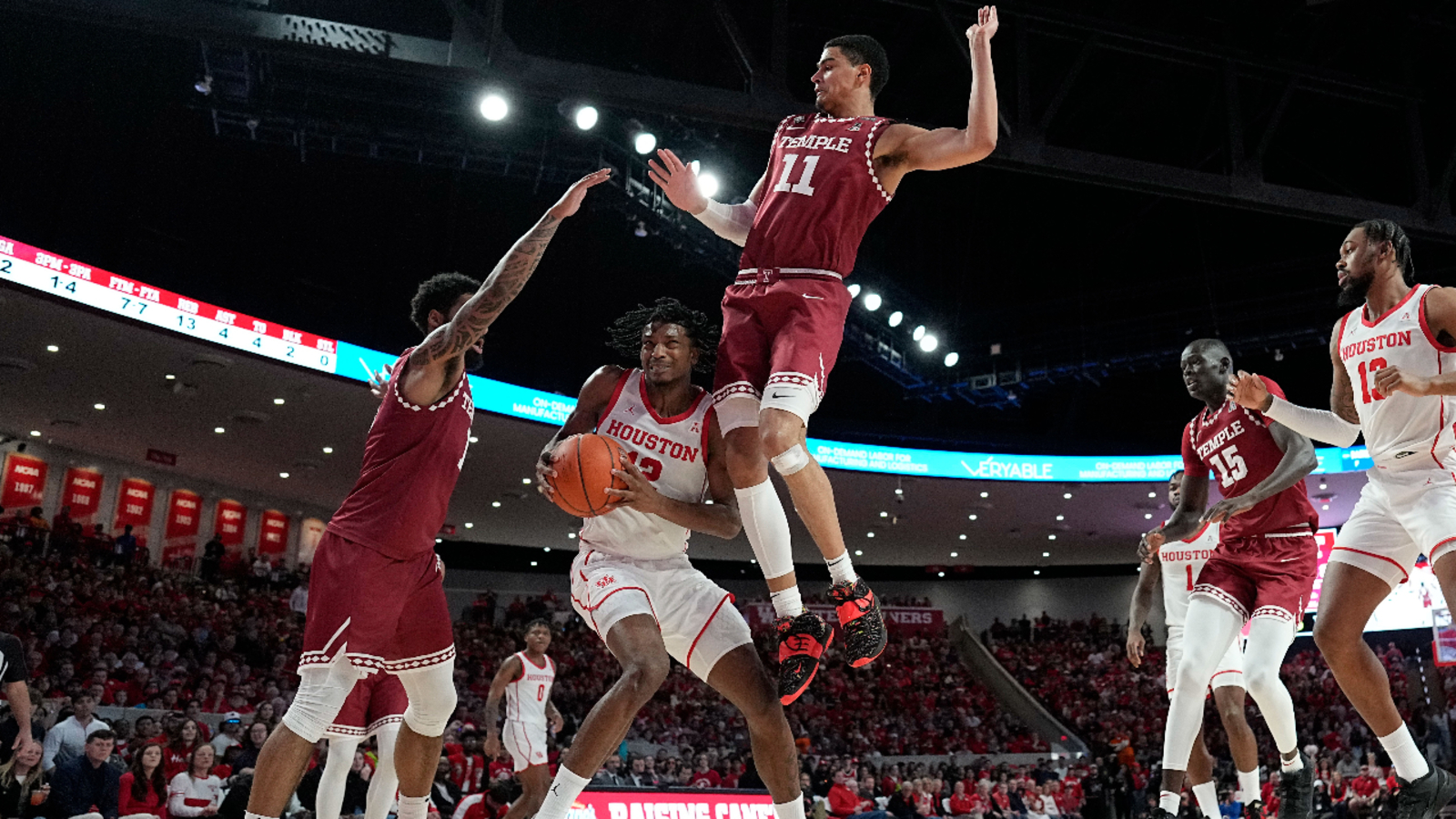 PHILADELPHIA (WPVI) — Temple coach Aaron McKay received a wet reception in his team’s locker room after the Owls’ win over No. 1 Houston.

He did not object.

Damian Dunn scored 16 points and made a free throw, Kur Joncuch blocked Houston’s go-ahead attempt in the closing seconds and Temple held on for a 56-55 victory over the top-ranked Cougars on Sunday.

“It was a cold celebration for me because the guys threw a lot of cold water on me, so that was really good,” McKay said. “It’s always great to see the guys so excited to win and just enjoy the game of basketball.”

“Anytime you get a chance to beat the No. 1 team in the country on their home floor, it was a great atmosphere and a really good win for our guys,” McKay said.

Down 55, Dunn hit a free throw with 1:06 left to give Temple a one-point lead. Jamal Shead missed a three-pointer and Nick Jourdain grabbed a rebound. Dunn missed a layup with 8 seconds left and Joncuch grabbed the rebound, but after a review, the Owls were whistled for a shot clock violation.

“I was trying to attack the rim,” Dunn said. “I wasn’t really looking for (a challenge), but I was trying to be aggressive and go down there, putting pressure on the referee.”

Trailing by one, Shedd drove to the basket, but Yonkuch blocked it out of bounds with 1.3 seconds left. Tramon Mark’s layup attempt failed at the buzzer and gave the Owls the win.

Dunn said Joncuch “really won the game for us.”

“I saw my teammate get beat and I was like, ‘We’ve got to do something,’ because all bets are off at this (moment), so I just went up and got the block,” Chonkuch said.

Zach Hicks added 12 points for Temple, which snapped a six-game losing streak to Houston. The Owls shot 31%, but were 20-of-22 from the free throw line.

Houston coach Kelvin Sampson said the game was good at the end, but they just missed shots.

“We were never able to make a big play,” Sampson said. “We needed a big hit. We’ve made (big shots) dozens and dozens of times over the years when maybe we didn’t have a great night offensively, but we still found a way to win.”

“It’s definitely frustrating,” Sampson said of the missed free throws. “As a team, when you start to miss like that, especially some of our young guys, you probably start to press. Free throws can become mental like anything else… It’s an unfair battle when one team goes 20-for-22 and the other goes 11-for-21.”

Temple: The Owls improved to 2-0 this season against ranked opponents. … Temple missed the game’s final field goal for 7:18 and was 5 of 21 from the field in the second half. … The Owls had 11 assists on 14 field goal attempts.

Houston: At 30 apiece at halftime, it was the first time this season that the Cougars didn’t lead at halftime. … Sampson received a technical foul in the second half for arguing a foul. … Houston outshot Temple 39-33.

Houston: at Central Florida on Wednesday.

The School District of Philadelphia is suing the city

A black employee was demoted when she applied for a senior...