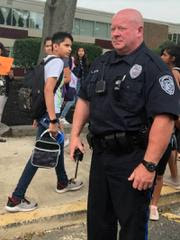 The 36-year-old law enforcement veteran retired from the South Brunswick Police Department and became a lieutenant, according to information provided by the department on February 17. He later returned to the department in 2017 as a school resource III class officer.

In 2001, he was part of a team of South Brunswick officers sent to New York to help immediately after the September 11, 2001 attacks.

During his more than three decades, he has worked in many aspects of the police department, including patrol, emergency response team (ERT), evening shift manager, head of the Traffic Bureau and school resource officer (SRO), the statement said.

Chief Raymond Haiduk said in a statement: “Lenny loved being a police officer and serving our community. He was a gentle giant, quiet and resourceful. He knew everyone and everything that was going on.

“If something happened, Lenny was the person you were looking for,” he said.

Funerals will be arranged when they are available.

The motorist who died in the crash has been named by...

Phillies advance to World Series after beating Padres in Game 5...

The global firm is expanding its technology incubator as part of...

Chris Pratt and Catherine Schwarzenegger have a second child Entertainment

Naomi Osaka withdrew from Wimbledon due to an Achilles injury