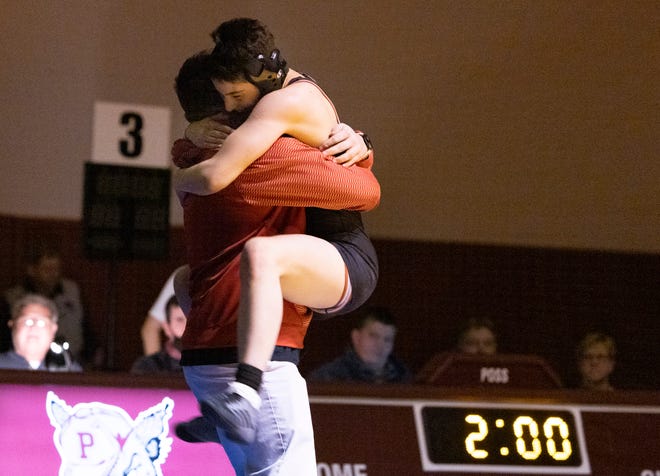 PHILIPSBURG – Maya Hemo says she never panics during a fight – even in the state final.

“I always panic before a game,” a Cherry Hill East High School junior said with a laugh.

Despite falling by a point in the last minute of the third period, the calm and cool Ham landed from Peterson and became the state champion in the 126-pound state weight class at the NSIAA girls ’individual tournament at Philipsburg High School.

Hemo became the first woman in Eastern history to win a state title, and only the third Cougar overall to join Tom Nugent (1983) and Greg Casamento (1988).

“I’m still handling it,” Hemo said with a huge smile a few minutes after stepping off the top rung of the awards podium.

Read more:HS Struggle: Mazzella is making history for Bordentown with a state title

While Hemo’s post-match interviews often lack words, her off-season work has said a lot with her performance on the mat this season. She went 21-1, her only defeat from the three-time Kali Roscos region in the regular season.

“There’s no person in this gym who deserves it more than she does,” Cherry Hill East coach Steve Ascola said. “If she makes it a war, she’ll win it every time because she’s the toughest person I’ve ever met.”

Hemo found herself in a battle against freshman Julia Fongaro of Buntan in a title fight. Escapes in the second period led Fongaro ahead 1-0, heading into the final two minutes.

Chemo worried? Her coach, of course, was not.

“She’s falling in the third period, she’s doing it all the time, but she’s holding on so tight,” Askola said.

Less than 45 seconds before the adjustment, Hemo moved on to his brother Maori’s favorite move and made Peterson’s throw, turning Fongaro on his back and scoring a 5:34 pin.

“My coach told me that no matter what happened, I was fine,” Hemo said. “That’s what I was thinking about all the time in that match.”

After finishing fifth in the state last season, Hemo took the sport really seriously. She joined the Patriot and Underground Struggle clubs, and also strengthened her strength training.

“She struggled every week in the offseason,” Askola said. “Along with her strength training, which helped her train my friend, these things made such a big difference.”

And “Hemo” now has a state title to confirm that.

South Jersey showed a strong performance in the state tournament, crowning two champions at Hemo and Lexi Mazella of Bordentown, as well as five others – Alex Firestone of Kingsway (152), Shailey Young of Gateway / Woodbury (185), Riley Lerner of 114 Cedar ), When Roscas of Delran (120) and Olivia Palmer of Timber Creek (132). A total of 19 wrestlers in South Jersey took the podium at the state tournament.

Firestone was trying to add another title to the family heritage.

Her older brother Zack won the state title for wrestling for Clearview in 2016, and the Firestones were able to become the first combination of a sibling from South Jersey to achieve that feat.

Alexa Firestone, who has consistently demonstrated the ability to come back from any deficit throughout her career, including 12-0 in last year’s consolation bout for third place, failed to overcome what she twice turned her back on in the third period of the 152nd pound. final. The result will be a 6-1 defeat.

While Firestone’s scholastic career is coming to an end, young talent in South Jersey shows that the future is bright.

Shailey Young may have had a hard time finishing her first season by getting a squeeze from two-time Amanda Pace State in the 185-pound final, but she set the bar high.

“In the seventh grade I did little wrestling and not at all last season (since the high school program was suspended due to COVID protocols, this season I hoped I wouldn’t be pinned much,” said Young, who finished 21-6th). this season… “Taking second place in the state is amazing, and more than I could ever dream of.”

The night before the state tournament, Young did not dream much when she said she had difficulty falling asleep. She didn’t delay in her first two fights, crushing both opponents, including Marisa DiPaola of West Morris Central, the senior who finished third in the state last season.

“My goal was to take third place when I came here. When I pressed (DiPaola), I couldn’t think, I couldn’t breathe, I just knew I would fight in the state finals.

Pace presented Young with another challenge that fights daily in the Gateway Room with the boys.

“Guys obviously don’t have the figure that most girls have in this weight class, and I’m not used to defending that in the room,” Young said. “It’s always hard to defend it when I’m fighting in women’s tournaments, but I need to get better at it.”

Young head coach Jamie Otis could not be proud of the young wrestler.

“She kept raising the bar for herself,” Otis said. “She is the first female state medalist in the history of the program, and as a freshman, she was able to reach the state finals, it’s an amazing feat.

“She is not just an athlete on the mat, she is also a great student. She’s just a good person in everything, and she deserves it. “

Lerner went on to show that she was one of the most talented young wrestlers at Garden State when she finished second for the second season in a row. Roscos ended her school career by finishing second.