Newjerseyupdates.com
Home USA News A South Jersey man is getting 55 years in prison for killing... 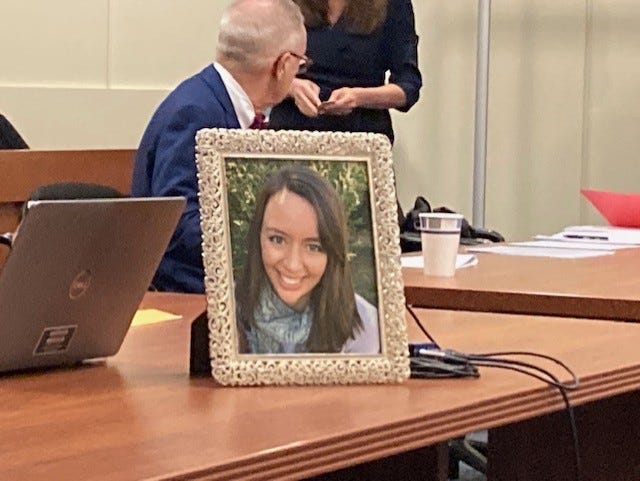 NEW BRUNSWICK – The family of Carolyn Byington, who was killed in her Plainsboro apartment by a co-worker, has been encouraged to celebrate her life while the man responsible for her death will spend 55 years in state prison.

Kenneth Saal, 33, of Lindenwold, was sentenced Monday by Middlesex County Superior Court Judge Pedro Jimenez Jr. to 45 years in state prison on the murder and robbery charges and to 10 years in prison on the conspiracy to commit murder and forgery charges witnesses The judge described the crime as “senseless”.

“Move starting today,” Jimenez told Byington’s family and friends. “She made every one of your lives better because she was in it. Mourn her by celebrating what she gave and all that she gave. She wants you to live your life.’

Jimenez said the June 10, 2019, stabbing death of a 26-year-old woman at home during her lunch break could have been avoided if Saal had left her alone.

He said Saal, who was hiding behind the door when Byington returned home unexpectedly, could have pushed her and run out the door, but instead stabbed her again and again and again in a “brutal and lewd” struggle.

“It makes no sense,” said the judge.

Addressing the court, Saal, who worked with Byington at the Princeton company, apologized for his actions but did not turn to her family.

“I apologize every day for my choices. If I could in any way take back what I did, I would without question. I am so sorry for the pain I have caused you all. There are no words to describe this atrocity, that I did or the suffering that I caused you,” said Saal, who sat between his attorneys, Brian J. Neary and Suzanne Axel.

Saal also apologized to his parents, who were in the courtroom, his younger sister and his grandparents.

“I’m sorry for being like this, and for hiding it from you for so long, my whole life. The facade I put up kept you from seeing any warning signs. I can only imagine the pain I caused by the shock of learning the truth,” he said.

He also apologized to his ex-wife and young daughter for his “selfish decisions.”

Dressed in purple, the color of justice, four rows of family members and friends of Carolyn Byington, a 2011 graduate of Ridge High School in Bernard and a 2015 graduate of Lafayette College, filled the courtroom.

Standing between Assistant Prosecutors Zvai Dollinger and Lynn Seborowski, Byington’s older sister Caitlin said she will miss her only brother’s hugs, laughter and long conversations for the rest of her life. As her sister’s next of kin, she had to tell their parents about Caroline’s death.

She said Caroline was to be maid of honor at her wedding and godmother to her future children. She said she wears a necklace with her sister’s cross and a ring her sister bought days before she died to keep her close.

Robert Byington described his late daughter as someone who was very organized, who loved helping others and had a great love for music.

And a family friend, who Carolyn’s mother had known since college, said she cherished the two days Carolyn spent with her at the beach shortly before she was killed.

Jennifer Byington said her daughter planned family vacations and set goals every year because she wanted to improve herself.

She said that the last time the family was together, they were celebrating family birthdays. When she and her daughter hugged, her daughter wanted more hugs.

“But there will be no more hugs,” Jennifer Byington said. “I try to accept her death every day.”

Saal’s sentence was part of a plea deal reached in November. At the time, Saal pleaded guilty to murder, first-degree criminal mischief, burglary and stalking.

He planned a mock assassination with another inmate at the Middlesex County Correctional Center in North Brunswick, where Saal has been held since his arrest, to cast doubt on his case. He allegedly offered to pay the prisoner $15,000 to make it appear that Byington’s killer had not yet been apprehended.

Court documents show part of the case was unraveled through wiretapping weeks before Saal was scheduled to stand trial. During the sentencing, Dollinger played a portion of the audio recording in which Saal instructs another inmate to stab the young woman in the neck, use bleach to wash it and make sure the cell phone’s location search is turned off.

Saal also admitted that, as an alternative, he thought of a plan to kill one of the two witnesses who were to testify at the trial and stage their deaths as suicides with a note claiming responsibility for Byington’s murder. Dollinger said the notes were found in Saal’s jail cell.

In pleading guilty, Saal said that in April 2019, he copied Byington’s house key while she was at work and used the key to enter her apartment for several days, and installed hidden surveillance cameras to record her in her home. without her knowledge.

He visited Byington’s apartment several times before the day of her murder. He also told how he brutally killed her when she unexpectedly returned home to find him at home.

Byington worked as a market research project manager at Princeton-based marketing firm Engine US. When she didn’t return to work that June day, co-workers asked the police to check on her. Plainsboro police went to her apartment around 5:57 p.m. and found her dead.

Saal, who started working as a full-time accountant at Engine US in July 2016, was arrested two months later and charged with murder and unlawful possession of a weapon.

Colleagues reported that Saal’s behavior changed after Byington’s death. He allegedly lied about his whereabouts while Byington was on her lunch break, and he allegedly asked a co-worker if he could be arrested based on “circumstantial evidence.”

Saal allegedly told his boss on June 10, 2019, that he was fixing his car and would be late for work. His boss later found out that Saal was not at the car repair shop. Other colleagues also reported seeing cuts on Saal’s hands in the days after Byington’s death.

Police dashcam footage also showed Saal’s vehicle driving into Plainsboro around 2 p.m. on June 10, about six miles from the office where Saal and Byington worked.

A warning has been added to the premiere of the “Amazing...

Nabi Kate is finally shining in Liverpool, but after the new...

Mike “Situation” Sorrentino is ready to try the birth of another...

Podcast Under The Ring with “Professor” AEW Serena Deeb

Trent Grisham drops the F-bomb in a live interview after the...